Snooki Explains Why Sammi 'Sweetheart' Won't Be Back For 'Jersey Shore' 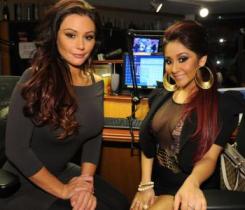 Fans were left wondering after Sammi was left out while nearly all of the original 'Jersey Shore' cast confirmed it was returning for the new series that would see them going on vacation together with their families.

"Everyone's asking why Sammi's not doing it. You have to ask her that — I'm not gonna speak for her," Snooki says.

"But Sammi is just in such a happy place that I feel like she doesn't want to jump back into that drama if it does happen."

"And being that there was a lot of Ron and Sam drama when we did film, it was just really hard on both of them. So I just think she doesn't want that anymore."

But Snooki says there's still a chance Sammi will return despite ex-boyfriend Ronnie Ortiz-Magro being a part of it.

"But at the same time, we're just like, it's gonna be different. We're all begging her to come back on the show. It's really up to her. Everyone pray that Sammi comes back, because I feel like she might change her mind."

"Sam, if you're listening, come to the show. Like, stop being—stop it. Stop it right now before I spank you."