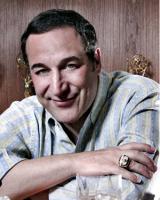 Sam Simon, who has amassed a fortune of millions as co-creator of 'The Simpsons', is giving away most of it as he battles terminal colon cancer.

Simon, who isn't married and has no children, was given a six-month prognosis at best in May.

But the 58-year-old has been putting that time and fortune to good use donating not only his current fortune but the "tens of millions" from royalties annually to charity.

"I get pleasure from it. I love it. I don't feel like it is an obligation," Simon tells THR. "There is stuff happening, really good stuff, every week."

Simon, who had surgery and is currently undergoing chemotherapy, says he has helped shut down roadside zoos, abusive animal shows, setup a dog-rescue haven in Malibu and wants to stop medical experiments on animals.

"I want medical experiments on animals stopped. They don't do anything, and they don't work," he says. "Veganism is an answer for almost every problem facing the world in terms of hunger and climate change."

"The truth is, I have more money than I'm interested in spending. Everyone in my family is taken care of. And I enjoy this."