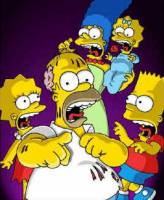 The opening sequence for 'The Simpsons' took a darker-than-usual turn this past weekend with its depiction of the animation process for the cartoon as sweatshop drudgery performed by exploited Asian workers.

The sequence begins with its standard opening until Springfield is revealed to have been covered with graffiti and tagged by Banksy himself. It's when the family gathers on their living room couch, that image becomes a reference shot and rapidly veers into a tour of sweatshop facilities, where legions of workers slave over Simpsons animation stills, kill kittens to stuff Bart Simpson toys, and use a chained unicorn to punch out DVDs.

The controversial sequence is reported to have caused delays behind the scenes because of disputes over the content. It was also inspired by the fact that much of the production work for each 'Simpsons' episode is outsourced to studios in South Korea.

The final shot reveals the sweatshop is housed inside the towering 20th Century Fox logo, implying that it's the parent's company decision to outsource creative aspects of the show, not theirs.

"Well, I haven't been fired yet, so that's a good sign," says longtime showrunner Al Jean. "Obviously, the animation to do this was pricey. I couldn't have just snuck it by Fox. I'll just say it's a place where edgy comedy can really thrive, as long as it's funny, which I think this was. None of it's personal. This is what made The Simpsons what it is."

"I saw that movie Exit Through the Gift Shop, and I asked our casting director Bonnie Pietila, who's had good luck getting people like Thomas Pynchon, if she could track Banksy down. She worked through the producers of the movie, and we just said, 'Would you like to do a couch gag for the show?' He submitted boards, which were more or less what you saw last night."

"I'd be lying if I said I didn't think about it a little bit, but I showed it to Matt Groening and he said, 'We should really try to do these as close as possible to what he wants'. We all thought it was really funny. There were some small things we went through with Broadcast Standards for taste, but I was impressed—for an American TV show we did this really satiric thing, and it was 95 percent of what he wanted."

"He's an artist. I just said, “It has to be in this format, and it comes off the beginning of the show.” And we did want to make sure that people knew—we have several clues, we tagged his name twice at the beginning and gave him a credit at the end just so it was clear what was going on."

Check out the complete opening sequence below: