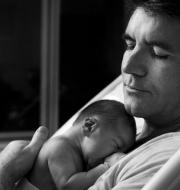 Simon Cowell, who wasn't quite sure how to react when he found out he was going to be a father, now says he can't see not being one.

"Phone rings at half past five in the morning," Cowell recalls when he found out girlfriend Lauren Silverman was going in labor in an interview with 'Extra'.

"So we had to find a flight, which we did, and I got there with two hours to spare."

"I held him within five minutes of him being born. I actually said to Lauren beforehand, 'What if I like the dogs more than him?' And she said, 'You're gonna be absolutely fine.'"

"And then literally within seconds of him being born, I got it!," he says. "I was born to be a dad!"

Baby Eric, named after Cowell's father, will be a month old on March 14.

"I look at him, Eric, and I think of my Dad all the time, so it's a really good thing," Cowell explains.

In fact, he's not opposed to having more kids: "I wouldn't rule it out! Well, I got Squiddly and Diddly," he says of his dogs. "I had a brother when I was younger so I kind of think it's cool to have two or three."

Cowell's mother still hasn't met her new grandson, not that she's not excited.