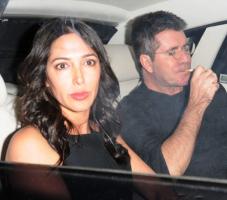 It appears Simon Cowell is finally going to be a father.

Lauren is said to be 10 weeks along and, while she is still married to Silverman, the two have filed for divorce.

Cowell said in a 2009 interview that he wasn't sure he was cut out to be a father.

"God, no. I couldn't have children. If I had them here drawing on the walls I'd go nuts," he said. "With kids, you've got a routine you can't escape from. You've got to be up at a certain time. Got to listen. When all you want to do is sit in a corner thinking."

However, in an interview with AOL last year, Cowell sounded like he was warming up to the idea. Although he believed it was too late.

"I do really, really like kids, because I can talk to them and listen to them," he explained. "The problem has always been how much time you need to devote to bringing up kids. I've always dedicated all my life to work, and at 52, I've probably missed the opportunity."