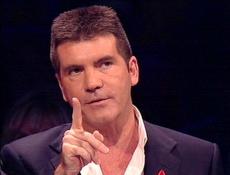 Facing reporters for the first time since news broke that he's expecting a baby after getting friend Andrew Silverman's wife pregnant, Simon Cowell tried his best to deflect the questions.

"Congratulations on the addition," a reporter said at 'The X Factor' panel. "The new baby. Were you as surprised by the news as we were?"

"I haven't read the newspapers. Am I missing something?," Cowell joked.

) jumped in: "Even if you did read the newspaper, I feel like you don't have to answer anything that you don't want to answer."

"Sorry. Unfortunately, I have to keep this for the moment private," Cowell then added. "It's just one of those things. But thank you anyway."

When asked what kind of father they judges thought Cowell would be, Lovato replied with a "no comment," while executive producer Rob Wade quipped, "He's a hell of a producer, we'll tell you that."

"That was clever," laughed Cowell.

After the panel, the judge said he would eventually discuss the news but couldn't do so right now.

Real estate mogul Silverman, who has a 7-year-son with wife Lauren, filed divorce papers naming Cowell and accusing his wife of adultery.

Meanwhile, the prize for 'The X Factor', touted as the biggest on television when it debuted, has been reduced from $5 million to $1 million.

"We got to a point where it was almost too much," Cowell said. "We want artists to be artists. The prize is now $1 million, and they still get a Sony recording contract."