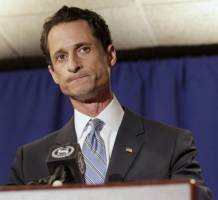 On the day Anthony Weiner's marriage ended after his latest sexting scandal, Showtime announced it will debut the documentary 'Weiner'.

The documentary follows the former congressman as he runs for New York City mayor in 2013, two years after he quit Congress after being exposed for sending women sexually explicit messages and photos of his bulge on social media.

Of course, Weiner's campaign collapsed after reports he was still sexting women. That theme continued on Monday as the New York Post revealed he was still continuing the behavior despite publicly stating he had begun a new chapter in his life.

His wife, Huma Abedin, who is also vice chair of Hillary Clinton's presidential campaign, announced the end of their marriage following the report "after long and painful consideration and work on my marriage."

Weiner has not denied the claims and tells the paper the two "have been friends for some time."

The documentary will air on October 22 at 9 PM EDT.