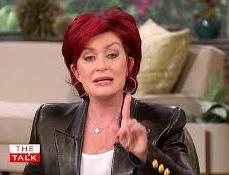 ) and her reasoning for posting nude or semi-nude selfies.

In an interview with The Telegraph, Osbourne says what the 'Keeping Up with the Kardashians' star is doing isn't "feminism."

"Kim says she's doing everything in the name of feminism, but that's not feminism!," Osbourne says.

"Those girls live off their bodies, half of L.A. has been through them and everything they do from the sex tape to the plastic see-through dresses and the gym wear is about sex, not female progress. And listen: God bless them."

"If Kim wants to show off her body, fine. But that's not feminism, that's being a ho. And there’s nothing wrong with being a ho, but always remember what you are."

"Yes, she's done it on her own. Yes, she doesn't rely on a man for her living. She makes more than enough, a terrific career. But I don't think because you bare your body that makes you a feminist."

"It's not about what she does with her own body, which we're all free to do whatever we want. Not criticizing anybody for what they do with their own body," she adds.

"More power to her that she's exquisite looking, she's confident in herself, she's a strong woman and she's done really well. She's done incredibly well. Not putting her down for that at all."