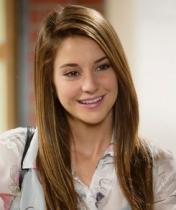 ) has had a breakout year with 'Divergent' and now 'The Fault in Our Stars'.

But the actress says she wasn't in the best frame of mind after filming scenes for 'The Amazing Spider-Man 2' as Mary Jane Watson and then having them left on the cutting room floor.

"For a few hours it was literally like, 'Oh, my God, was I awful? Why did they cut me? What are people going to think?,'" Woodley tells Vanity Fair.

"I woke up the next morning and I was like, 'O.K., it makes total sense.' I'm a pretty spiritual person, so I can just sit back and trust that everything happens for a reason, even if my ego doesn't like it."

In an April interview, 'The Amazing Spider-Man 2' director Marc Webb explained why he cut Woodley's scenes.

"There was one little scene at the beginning where she is next door and it took place right around the montage where he comes back and there was another little moment between Gwen and MJ. But it just tipped over," he said.

"The relationship between Peter and Gwen is so sacred and so powerful, that it just didn't feel right. And it sucks because Shailene is such a f--king great actress and so cool and magical, but it was just about having this obligation to this romance that I thought was sacred. It was just one of those things."

But it might have worked out best for both parties since likely Woodley wouldn't have been able to return to the franchise as MJ now that she's broken out on her own.