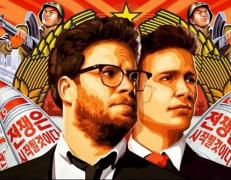 Seth Rogen recalls bumping into Kanye West soon after he mocked the singer for his 'Bound' music video.

"I heard 'Yo' and I turned around and it's Kanye which scared me at first," Rogen tells Seth Meyers.

West then invited Rogen to his van parked out front to give him a surprise preview of his new album -- rapping the lyrics to the playing beats in person.