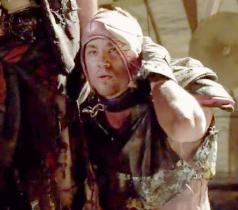 In an appearance on SiriusXM's Andy Cohen Live, Seth Rogen revealed how he convinced Channing Tatum to wear a ball gag and dog leash for his cameo in 2013's 'This Is the End'.

In fact, Rogen shared the hilarious email exchange between himself and the 'Magic Mike' star.

"How's it going dude? I have what is probably the single oddest offer you will ever get, so here it goes," began the email.

"It's a somewhat crazy movie in which me and other actors play themselves stuck in James Franco's house as the apocalypse happens," Rogen explained, "We have a very special role that we'd like you to play."

"The Gimp is wearing a wrestling mask, and when he pulls it up we would love nothing more than for it to be you underneath. I know this is crazy, but we really think it will get a massive laugh. Please don't take this the wrong way or be insulted by this," he added, "we just think it's a great joke and you would be great doing it."

Tatum responded with: "One, what the f***? Two, that's the craziest shit I've ever heard. Three, when and where do I show up?"

"All I've wanted ever is to be Danny's slut, is that weird?," he joked. "Don't tell him I'd be embarrassed."

Asked how he got Tatum to wear the bondage-themed outfit, Rogen said some of it was Tatum's idea.

"He pushed it so much further than I ever could have imagined," he laughed.