Seth Meyers: Trump 'Showed Us Who He Really Is' Over Charlottesville 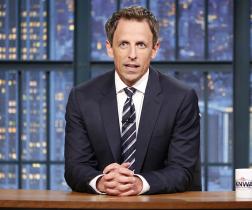 Seth Meyers says President Trump has spent the last week showing the nation "who he really is" in the wake of white supremacist violence in Charlottesville.

"But Trump isn't just a racist, he's also a narcissist," slams Meyers. "He defends the white nationalist movement both because he's racist and because they show up and they chant his name and they show him love."

"And his brain disease makes it impossible for him to denounce anyone who supports him."

"What Tuesday showed is that Donald Trump will never change. He showed us again who he really is -- a lying racist who's desperate for praise."