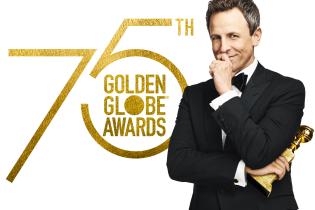 "Happy New Year, Hollywood. It's 2018, marijuana is finally allowed and sexual harassment finally isn't. It's going to be a good year."

"This was the year of big little lies and get out, and also the television series Big Little Lies and the movie Get Out."

"There's a new era underway and I can tell because it's been years since a white man was this nervous in Hollywood," he said. "By the way, a special hello to hosts of other upcoming award shows who are watching me tonight like the first dog they shot into outer space."

"For the male nominees in the room, it's the first time in months it won’t be terrifying to hear your name read out loud," he continued. "'Did you hear about Willem Dafoe?' 'Oh God, no!' 'He was nominated!'"

Beinging up Weinstein, Meyers said it was time to address the "elephant not in the room."

"Harvey Weinstein isn't here tonight because, well, I heard rumors that he's crazy and difficult to work with," said Meyers. "Don't worry, he'll back in 20 years. He'll be the first person to ever boo during the In Memoriam."

Referring to Spacey, Meyers asked if Christopher Plummer could replace the actor in the new season of 'House of Cards' after he replaced Spacey in 'All the Money in the World'.

"I hope Plummer can do a Southern accent, because Kevin Spacey sure couldn't," he said.

"If it's any consolation, I'm a man with absolutely no power in Hollywood. I'm not even the most powerful Seth in the room tonight," he said as the camera panned to Seth Rogen.

"Hey, remember when he was the guy making trouble with North Korea?," joked Meyers. "Simpler times."

"They tried to get a woman to host this show, they really did," he said. "They said: 'How would you like to come and be judged by some of the most powerful people in Hollywood?' The women said: 'Where is it?' And they said it's at a hotel and long story short, here I am."