Seth MacFarlane's 'The Orville' Renewed For Second Season By FOX 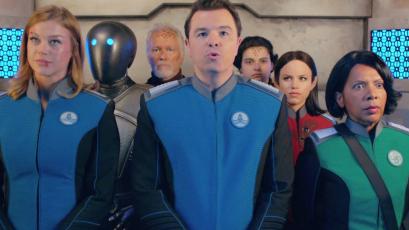 Seth MacFarlane's sci-fi series 'The Orville' has been renewed for a second season.

The live-action series, which has been surprisingly consistent in the ratings, follows the crew of a not-so-functional exploratory ship in the Earth's interstellar fleet, 400 years in the future.

Before the show's premiere, the 'Family Guy' creator explained he wanted to create a series that explored new ideas while not being the same week to week.

"One of the things I always look to as a Star Trek fan, there was an episode that was a big two part episode about the Borg. It was followed up the next week with a story about Picard going home to France to visit his brother at the winery," he said.

"It was the same show and the stories couldn't be more different in tone. This is how TV should be. You should be able to write any kind of story each week and surprise your audience, but your characters remain intact and true to who they are."

As 'The Orville's renewal became official, MacFarlane thanked the "awesomely enthusiastic fans who've made this happen."