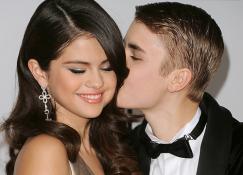 ) had a few words of wisdom for ex-boyfriend Justin Bieber after he lashed out at fans for being less than welcoming to rumored new girlfriend Sofia Richie.

It began when Bieber posted a black-and-white shot of himself with his new love as he warned fans: "I'm gonna make my Instagram private if you guys don't stop the hate this is getting out of hand, if you guys are really fans you wouldn't be so mean to people that I like."

Richie is travelling with Bieber during his tour in Japan. But Bieber's fans didn't take kindly to the threat.

"You don't act like you love them. Respect them! Without them you wouldn't be where you are today! Remember that!"

"Without them you would still be that boy playing alongside the street making jams for coins," said another.

"If you can't handle the hate then stop posting pictures of your girlfriend," she laughed. "It should be special between you two only. Don't be mad at your fans. They love you."

Bieber later replied to Gomez's comment and took his own dig at the singer: "It's funny to see people that used me for attention and still try to point the finger this way. Sad. All love. I'm not one for anyone receiving hate. Hope u all can be kind to my friends and each other. And yes I love my Beliebers."