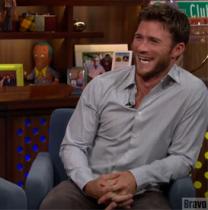 Scott Eastwood dropped a bombshell during his appearance on 'Watch What Happened Live' on Thursday night.

Eastwood confirmed the story that Ashton Kutcher's cheating ways were what led to his split with Demi Moore. How does he know? Because one of the girls Kutcher cheated with was his girlfriend.

The conversation started when host Andy Cohen asked Jon Cryer whether it was awkward when Kutcher joined 'Two and a Half Men', since they had both dated Moore.

"If it makes you feel any better he did sleep with one of my ex-girlfriends," Eastwood interjected. "But she was my current girlfriend at the time."

"He slept with her while you were together?," asked Cohen.

"Yes. It's okay, I'll shake his hand," replied Eastwood. "I think it was the catalyst that broke him and Demi up."

Cohen asked Eastwood whether "it the girl in San Diego?."

"Yeah it was her and her friends," Eastwood confirmed. "My buddy and I dated those two girls."

Kutcher's encounter with the two girls he met in a hot tub at a raucous San Diego party was reported about after one of the women, Sara Leal, spilled the beans.