Scarlett Johansson Calls Out Franco at Women's March: 'I Want My Pin Back' 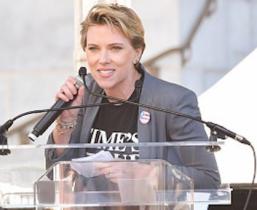 ) called out James Franco for standing behind the Time's Up movement in public while allegedly "privately preying on people who have no power" during her speech at the Women’s March in Los Angeles on Saturday.

"In light of the recent revelations regarding abuse of power, and sexual harassment, and the question of consent versus coercion, I find myself pensive, taking time, and digging deep to understand where we are, and how we got here," said the actress.

"My mind baffles. How could a person publicly stand by an organization that helps to provide support for victims of sexual assault, while privately preying on people who have no power?"

Her publicist later confirmed to reporters that Johansson was referring to James Franco in her speech.

Several allegations against Franco surfaced after he wore a pin in support of the Time's Up at the Golden Globes.

"Why is James Franco allowed in?," 'The Breakfast Club' actress Ally Sheedy got the ball rolling on social media. "Said too much. James Franco just won. Please never ever ask me why I left the film/tv business."

In the days to follow, five women accused Franco of inappropriate or exploitative behavior in a Los Angeles Times report.