Sarandon On Morgan's Problem With Her Cleavage: 'Don't Think His Mother Nursed Him' 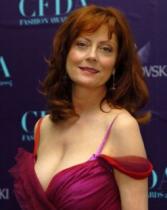 In a chat with Seth Meyers, Susan Sarandon tells the host she doesn't know why Piers Morgan had a problem with her cleavage at the SAG Awards.

Morgan has said he was uncomfortable with the actress' look because he didn't think it was appropriate as presenter of In Memoriam segment of the night.

"Does he have a job? A real job? Why does he have so much time," said Sarandon.

"He's doing something again today. He can't stop. I don't think his mother nursed him. Something's off."

"I hate to say he's 'milking' this situation," she quipped.

"See I think he played this perfectly," interjected Meyers. "Because what did your supporters start doing?"

"They just flooded him with pictures of their cleavage," Sarandon replied.

"I'm thinking Piers Morgan is sitting at home on his computer right now thinking 'I played this just right! They're just coming to me!'"