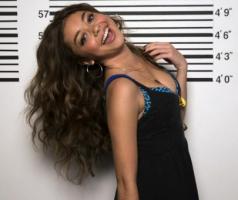 ) had to abruptly leave an event in Sydney after being groped by a fan.

"Sorry to all the fans outside the event that I didn't get to say hi to but I had to leave due to an inappropriate touch of a fan," she wrote on Twitter.

Boyfriend Matt Prokop, who accompanied her to Australia, posted: "To the a--hole who assaulted Sarah tonight I hope to God you don't see next week."

"All Sarah wanted to do tonight was say hi to the girls who were waiting outside one douche can ruin it for everyone," he continued. "Goodnight."

Police have charged a 29-year-old man with indecently assaulting the 23-year-old actress outside a party for cast members at a Sydney hotel.

The man reportedly grabbed her breast after asking her to pose for a photograph.

"Don't touch me there!," Hyland said before security intervened.

'Modern Family' is currently filming a vacation episode for the hit comedy in Australia.