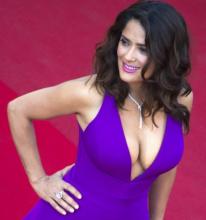 It would be fair to say Salma Hayek (photos

"It's a dumb solution and proposition," the actress tells People magazine.

"Whether it gets built, whether it doesn't get built, nobody has given you a real budget on it — we do know it's billions and billions of dollars. We're talking about who's going to pay for it and the wall is not the solution."

"We have to talk about smart reforms because it's very necessary," she says. "There are smarter ways we can come up with to control immigration, and do immigration reform that is much more beneficial for America."

"For example, there's a lot of work for farmers in this country and there are not enough farmers for all the work there is. A lot of the people that do not want to be involved in the drug industry of Mexico are very skilled farmers; they do not want to participate in that so some of them are here."

"The people that come, they don't necessarily want to stay — they would be happy to come and work at the time of the harvest and go back to their country," she adds. "America can benefit from these expert workers and they can pay taxes that can benefit America."