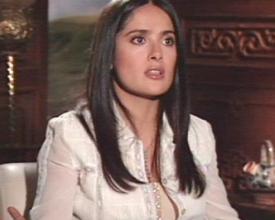 ) details her experiences with disgraced producer Harvey Weinstein through the years and while making her film 'Frida'.

Hayek says Weinstein couldn't stand the actress refusing his advances, once threatened to kill her and demanded a full-frontal nude scene from her in 'Frida' to have it made.

"I was so excited to work with him and that company. In my naïvete, I thought my dream had come true. He had validated the last 14 years of my life. He had taken a chance on me — a nobody. He had said yes," Hayek recalls.

"Little did I know it would become my turn to say no. No to opening the door to him at all hours of the night, hotel after hotel, location after location, where he would show up unexpectedly, including one location where I was doing a movie he wasn't even involved with."

"The range of his persuasion tactics went from sweet-talking me to that one time when, in an attack of fury, he said the terrifying words, 'I will kill you, don’t think I can't,'" she claims.

When she was making 'Frida', the Frida Kahlo biopic which she had worked on for years, she said Weinstein took the script away from her and offered it to another actress, forcing her to resort to lawyers to ensure she didn't lose all her hard work.

He then made a list of seemingly impossible tasks for her to finish in order to keep the film going, including getting someone to do a complete rewrite of the script with no payment, which she somehow managed to do after friend Edward Norton stepped in.

However, as filming proceeded, he continued to make demands -- one of which Hayek says was to "agree to do a sex scene with another woman" in which he "demanded full-frontal nudity."

She said after all the sacrifices her friends had made to help her get the project this far, she agreed to do the memorable nude scene (uncensored link) get the film completed.

"He had been constantly asking for more skin, for more sex. There was no room for negotiation," she explains. "I had to say yes. By now so many years of my life had gone into this film. We were about five weeks into shooting, and I had convinced so many talented people to participate."

"How could I let their magnificent work go to waste? I had asked for so many favors, I felt an immense pressure to deliver and a deep sense of gratitude for all those who did believe in me and followed me into this madness."

Hayek says when it came time to film the scene, she had a "breakdown" on set.

"My body began to shake uncontrollably, my breath was short and I began to cry and cry, unable to stop, as if I were throwing up tears," she says. "Since those around me had no knowledge of my history of Harvey, they were very surprised by my struggle that morning."

Despite that, Weinstein often threatened to send the film straight to DVD. When it was finally released it went to gross $56 million worldwide and earn six Academy Award nominations, including a Best Actress one for Hayek. It won two Oscars.

Weinstein's spokesperson has responded to the charges by saying: "As in most collaborative projects, there was creative friction on Frida, but it served to drive the project to perfection. The movie opened in multiple theaters and was supported by a huge advertising campaign and an enormous Academy Awards budget."

"All of the sexual allegations as portrayed by Salma are not accurate and others who witnessed the events have a different account of what transpired."