Saffron Burrows Out Of Bones Spinoff 'The Finder' 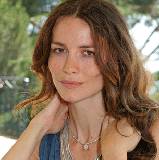 Saffron Burrows, the female lead on Fox's Bones spinoff 'The Finder', is leaving the show.

Burrows played Geoff Stults' right-hand woman Ike, a bar owner and helicopter pilot, in an episode of 'Bones' which served as a backdoor pilot for the show.

However, the network has decided to reconceive and recast the role before the series launches this fall when 'Bones' goes on a short hiatus, made necessary by Emily Deschanel's real-life pregnancy.

We commented that Saffron Burrows wasn't really fitting in with the story and the flow so this is welcome news and one move Fox definitely had to make.

Although we still don't understand why it would cancel shows with a built-in audience, albeit modest ones, like 'Chicago Code', and 'Lie to Me' for an unproven new show.

Other than 'The Finder', the British actress most recently starred opposite Jeff Goldblum on 'Law & Order: Criminal Intent'.