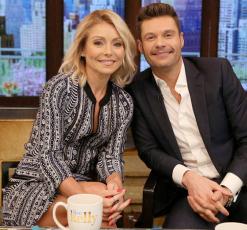 After a year-long search, 'Live with Kelly' announced on Monday morning that Ryan Seacrest will join Kelly Ripa (photos

) as the show's new permanent co-host.

"Today, the next chapter of the Live story is about to be written," Ripa told the audience. "Today, my new co-host will officially be joining me on Live. And today is a very good day."

"I would first like to think all of the men and women who sat next to me co-hosting this past year. Thanks is not a big enough word, but they took time out of their busy schedules and out of their day jobs. We all became family, and they became part of the Live family forever," she began.

"Ryan is a close friend and his star shines as brightly off camera as it does on," Ripa said. "His tremendous success is only matched by his impeccable reputation. Plainly said, everyone loves him, and so will our daily viewers."

"Nice to see you, partner," Seacrest said as he walked onto the set. The former 'American Idol' host added "This is going to be the most fun that I’ve ever had."

The 42-year-old Seacrest is infamous for his busy schedule with his New Year's Eve show, red carpet coverage a daily Los Angeles-based radio show. However, he's been looking to get back on TV ever since his 'Idol' gig ended.