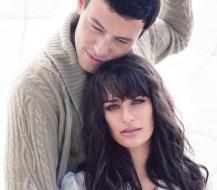 "The ending of Glee is something I have never shared with anyone, but I always knew it," Murphy said during his eulogy at a private memorial service in July for Monteith. The excerpt was recently printed by Entertainment Weekly. "I've always relied on it as a source of comfort, a North Star."

"The very last line of dialogue was to be this: Rachel comes back to Ohio, fulfilled and yet not, and walks into Finn's glee club. 'What are you doing here?' he would ask. 'I'm home,' she would reply. Fade out. The end."

"For me, Cory was both the beginning and the ending of Glee... literally," he said.

Michele and Monteith were both a couple on screen and off it. Murphy, who has announced that next season will be the show's last, says he has since formulated another ending that he believes will end the series and at the same time honor Finn.

Monteith died at age 31 back in July from a "mixed drug toxicity" consisting of heroin and alcohol.