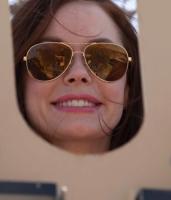 Rose McGowan blasted her followers on Instagram after some of them said she looked like Michael Jackson.

The comments were made after McGowan shared a picture of herself wearing sunglasses, simply titled 'Afghanistan'.

McGowan fired back at the woman and said: "Has anyone stopped to think that Michael Jackson used to be black, and tried to turn himself into a white, possibly Irish person with a cleft chin and a tiny nose? I was born Irish. So f--k off losers."

The actress, who had reconstructive surgery after a car accident in 2007, was already having a bad day with a tooth that "just broke in half" and "the worst haircut of my life."