Robert Pattinson Has Odd Conversation About 'Heavy Saliva' With Kimmel 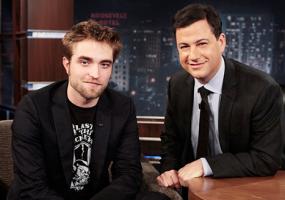 In an appearance with Jimmy Kimmel on Thursday night, Robert Pattinson had a conversation with the late night host he's probably regretting this morning.

"For some reason, I have extraordinarily heavy saliva," he said. "It's funny. I noticed it the other day... if I try and spit I can only get it about a foot."

"I've never heard anyone say they have heavy saliva before," laughed Kimmel. "Have you weighed it? We should have people drool in a glass and then we'll weight yours against theirs."

"But your saliva is so thick you could literally bruise someone," quipped Kimmel.