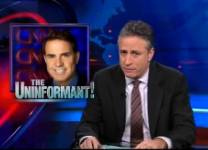 CNN has fired host Rick Sanchez, after he called Jon Stewart a 'bigot' during a radio interview.

During an interview on the radio program 'Stand Up with Peter Dominick', Sanchez went on a rant and said there is racism in the media, not just from conservatives but also what he called "elite, establishment liberals."

"Deep down, when they look at a guy like me, they see a guy automatically who belongs in the second tier, and not the top tier," he said.

Sanchez then pointed to Stewart, and called 'The Daily Show' host a "bigot," who only surrounded himself with people like him.

"I think to some extent Jon Stewart and Colbert are the same way. I think Jon Stewart's a bigot."

"I think he looks at the world through, his mom, who was a school teacher, and his dad, who was a physicist or something like that. Great, I'm so happy that he grew up in a suburban middle class New Jersey home with everything you could ever imagine."

"I'm sorry, but I just don't buy this thing that the only people out there who are prejudiced… are the right. There's people that are prejudiced on both sides."

"Look at his show, I mean, what does he surround himself with? That's what happens when you watch yourself on his show every day, and all they ever do is call you stupid."

Sanchez has been a frequent target of Stewart and fellow Comedy Central personality Stephen Colbert. In March, Stewart dedicated an entire segment to criticizing Sanchez' coverage of the Chilean earthquake, as he called CNN "the most trusted name in over-caffeinated control freaks."

"If I did just sit there and read the teleprompter every day, Jon Stewart would never say a word about me. He'd say I'm a good Hispanic anchor, 'Way to go, you've done a good job, stay right there.' I am a complex human being, I'm not some moron," Sanchez continued.

Dominick suggested that Stewart could be considered a minority because he is Jewish, but Sanchez, who is Cuban America, rejected that thought.

Sanchez had been with CNN since 2004 and began hosting his own show, Rick's List, in January.

You can listen to a portion of the interview below: