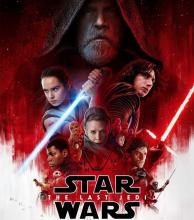 A brand new action-packed trailer has been released for 'Star Wars: The Last Jedi'.

The two and a half minute trailer reveals a lot of new footage from the film and some nuggets that are sure to spark speculation among fans of the franchise.

There's Luke Skywalker scared by Rey, Rey trying to find her place in the galaxy and Kylo Ren reaching out to her in the trailer.

"I've seen this raw strength only once before. It didn't scare me enough then. It does now," says Skywalker.

The clip ends with Rey looking for someone "to show me my place in all this" and what looks to be Kylo reaching out for her hand.