Regis Philbin: Kelly Ripa Doesn't Talk Because 'Got Very Offended When I Left' 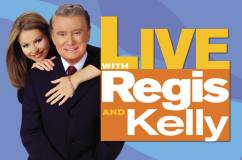 After recently revealing that he hasn't spoken to Kelly Ripa (photos

) since he left 'Live' six years ago, Regis Philbin thinks he knows why.

Asked if he still kept in touch with Kelly, during an interview on 'Larry King Now' this week, Philbin admitted: "Not really, no."

"Never once did they ask me to go back," he admitted.

Philbin hosted the morning talk show with Ripa for a decade and 'Live' for nearly three times that.

"She took it personal?" King asked.

"Yeah, I think so," replied Philbin.

As for whether he missed hosting the talk show, Philbin said: "I do miss it. There are times when I really miss it, and wish I'd never stopped."

"But, you know, I just figured it was time to let go."