Rebel Wilson Accuses Kardashians Of 'Smear Campaign' Against Her For Comments 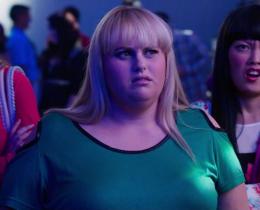 Rebel Wilson is accusing the Kardashian family of a "smear campaign" against her after she criticized the reality TV fixtures and their road to fame.

) because she didn't want to be next to them.

"What the Kardashians stand for is totally against what I stand for," Wilson said.

"I'm all about personality and working hard to get to where I am," she explained. "How Kim Kardashian (photos

) got famous from the sex tape and I just went to acting school and worked really hard."

But Wilson says she now finds herself being targeted by the family and its fans.

"I'd be very happy to debate the Kardashians anywhere / anytime / any topic," she wrote on social media. "Or maybe their publicist can just stop the smear campaign against me because I made one prompted comment about them on Australian radio."

"In any event, I'm MORE than over this little thing and wish the K clan well. Even sent them flowers."