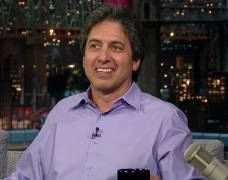 Last week, in an appearance with David Letterman, Ray Romano talked about some things he's noticed as he's gotten older.

Most of them negative, but Romano has definitely noticed something on the positive side of the ledger.

"There are advantages, sure. You're older, you're wiser," began the former 'Everybody Loves Raymond' star.

"Movies will cost less soon. Here's a weird one I found out as you get older. I took a shot in the groin the other day. It's the biggest fear."

"My kid and I we were doing a little basketball and boom from the knee. It wasn't a fight," he laughed.

"Every guy knows that's the worst pain the world and it didn't hurt as much as I thought."

"Well, I'll tell you why. I figured it out. When you're younger it hurts because then things are just... more compact, you know what I mean."

"I think that's the body's way of protecting the species. This is my Peabody award winning theory. If you think about it, when you're 20 or 30, you need what's down there so your body wants to send a message: don't get hit here."

"But when you're older, they're kind of like tonsils. Somedays the left's lower, sometimes the right's lower. It's kind of like the world's slowest race to the ground."