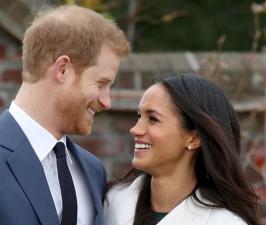 The 33-year-old royal asked the 36-year-old 'Suits' actress to marry him a year and a half after they secretly began dating.

"His Royal Highness and Ms. Markle became engaged in London earlier this month," Clarence House said in a statement.

"The couple will live in Nottingham Cottage at Kensington Palace."

The royal wedding is scheduled to happen in spring 2018. Of course, it will be the biggest royal celebration since his brother Prince William walked down the aisle with Kate Middleton in 2011.

Queen Elizabeth and Prince Philip said they were "delighted for the couple and wish them every happiness."

Markle's parents said: "Our daughter has always been a kind and loving person. To see her union with Harry, who shares the same qualities, is a source of great joy for us as parents. We wish them a lifetime of happiness and are very excited for their future together."

Prince William and Kate Middleton added: "We are very excited for Harry and Meghan. It has been wonderful getting to know Meghan and to see how happy she and Harry are together."

It will also mark the first time a direct heir to the throne married an American in nearly 80 years.