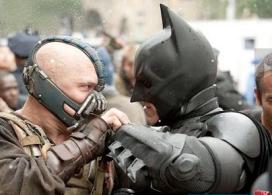 With many Democrats already portraying Trump as a villain, they are having a field day after Trump echoed the line from 'The Dark Knight Rises' where Bane address the citizens of Gotham, saying he's giving them the city back from the rich and corrupt.

A message that certainly wasn't much different from Trump's during his speech.

Bane's line in the movie was: "We take Gotham from the corrupt. The rich, the oppressors of generations who have kept you down with myths of opportunity, and we give it back to you, the people."