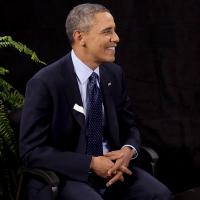 'Between Two Ferns' scores its biggest guest yet as Zach Galifianakis sits down with President Barack Obama.

"Sorry I had to cancel a few times. My mouse pad broke last week," Galifianakis begins.

"You know what, Zach, it's no problem," says Obama. "I mean I have to say when I heard that people actually watch this show I was actually pretty surprised."

"Shhh," says Galifianakis as the introduction appears on screen.

Galifianakis then asks since Obama pardoned a turkey in 2013, what he had planned for 2014.

"We'll probably pardon another turkey. We do that every Thanksgiving. Was that depressing to you?," quips Obama. "Watching one turkey taken out of circulation. A turkey you couldn't eat."

The actor also asks Obama about not being able to run for a third term.

"Actually I think it's a good idea," says Obama. "You know, if I ran a third time it would be sort of like doing a third Hangover movie. It didn't really work out, did it?"

Obama made the appearance to briefly talk about Healthcare.gov and the Affordable Care Act.