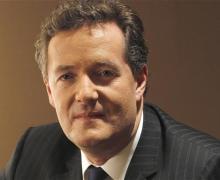 Piers Morgan is calling Shia LaBeouf a "silly little man" for his recent claims that a woman raped him during his 'IAmSorry' art installation.

"A Hollywood actor sitting with a paper bag over his head who did nothing as he claims a woman 'raped' him has not been raped."

LaBeouf said last week that "one woman whipped my legs for 10 minutes and then striped my clothing and proceeded to rape me then walked out with her lipstick smudged to her awaiting boyfriend who I imagine was quite hurt by it."

He added that his girlfriend, who was waiting outside, was "really hurt" when she realized what happened.