Pharrell Williams: 'Beyond Sad' That Iranians Arrested For Dancing To 'Happy' 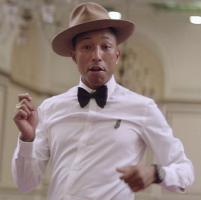 Pharrell Williams is disappointed with the arrest of six young Iranians for dancing to his breakout hit 'Happy'.

"It is beyond sad that these kids were arrested for trying to spread happiness," Williams writes on Facebook.

The Iranians were arrested earlier this month after posting a video online showing themselves and their friends dancing around Tehran to the viral hit.

Tehran Police Chief Hossein Sajedinia ordered the arrests of the three men and three women for making an "obscene video clip that offended the public morals and was released in cyberspace."

But, at least publicly, Iranian President Hassan Rouhani is saying he doesn't agree with the arrests.

"Happiness is our people's right. We shouldn't be too hard on behaviors caused by joy," he said.