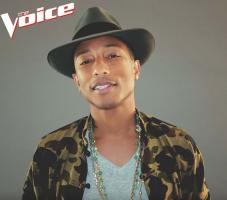 Pharrell Williams is joining 'The Voice' as a coach for its seventh season.

The 'Happy' singer will replace Cee Lo Green, who announced in February that he would not be returning to the NBC singing competition.

"I am thrilled to have Pharrell come back to The Voice family, and this time as a coach," says executive producer Mark Burnett.

"Continuing in The Voice tradition of having the biggest and most current music stars as coaches, Pharrell fits perfectly."

Pharrell served as a mentor for Usher's team during the fourth season and performed the song 'Blurred Lines' with Robin Thicke on the show.

NBC's president of alternative and late night programming, Paul Telegdy, adds: "Pharrell has already made a considerable impact as a mentor, drawing on an impressive track record as both a producer and performer."

"It is a perfect fit for The Voice as we evolve and reach for new heights with this franchise. It feels like we are welcoming an existing family member home."

"This is going to be so fun." Pharrell said on Twitter following the official announcement.

"Welcome to the circus dude!," Adam Levine, who's been a coach on all six seasons of 'The Voice', added.