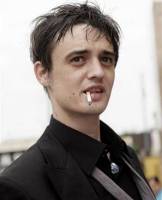 English musician Pete Doherty has been sentenced to six months in jail after pleading guilty to possession of cocaine.

The troubled British rocker had been arrested by police investigating the death of heiress Robin Whitehead, who died from a suspected drug overdose last year.

He pled guilty to possession earlier this month but was granted unconditional bail until the sentencing on Friday.

The Babyshambles frontman has been repeatedly arrested for drug offences and those arising from drug use, such as driving under the influence. He has admitted to using crack cocaine, heroin, cannabis and ketamine.

Doherty has previously said he worked as a drug dealer to pay for his drug habit.

He had been due to perform a concert in Scotland Friday evening but, needless to say, that will no longer happen.