The released cover cover of its upcoming issue, features twins Vivienne Marcheline and Knox Leon with their parents. Word is that the issue, which hits newsstands on Monday, contains a 19-page spread of the couple and their six children.

Some news outlets are reporting that 'People' and 'Hello!' paid a combined $10-11 million for the exclusive photos, which is slightly lower than what was first expected. The magazines would not comment on the figure but did confirm they were told that all proceeds from the sale of the photos would be donated to charity.

Jolie gave birth to the twins on July 12 in Nice, France. There were reports that paparazzi photos of the twins were being offered to various publications, however, those quickly died down after Brad Pitt threatened to sue if any of them saw the light of day before the exclusive photoshoot hit newstands. 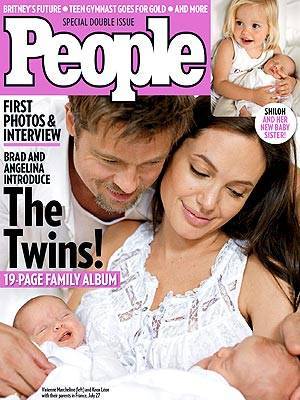