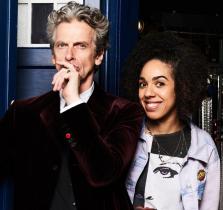 BBC has revealed that Pearl Mackie will be joining 'Doctor Who' as the time travelling doctor's new sidekick.

The newcomer will play Bill as she joins Peter Capaldi in the TARDIS for the show's 10th season.

"I'm incredibly excited to be joining the Doctor Who family. It's such an extraordinary British institution, I couldn't be prouder to call the TARDIS my home!," Mackie says in a statement.

"I always loved stage combat at drama school so I can't wait to get on set and kick some evil monsters into the next dimension!"

Mackie replaces Jenna Coleman, who is leaving the series after four years to star in the drama 'Victoria'.

"It is a genuine delight to welcome Pearl Mackie to Doctor Who," Capaldi adds. "A fine, fine actress with a wonderful zest and charm, she’s a refreshing addition to the Tardis and will bring a universe of exciting new possibilities to The Doctor’s adventures."

The next season of 'Doctor Who', the last with Steven Moffat as showrunner, begins filming next month.