Paula Deen Recalls N-Word Scandal On 'Today': 'I Disappointed Myself' 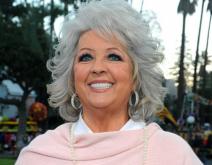 Paula Deen returned to the 'Today' show on Tuesday, more than a year after an interview that backfired in which she insisted she wasn't racist and didn't know that the N-word was offensive.

With her sons Bobby and Jamie Deen by her side, Deen said she tried to ignore the frenzy around her Food Network dismissal and even looked away at a retrospective video the morning show aired.

"I looked at none of it," Deen told Matt Lauer. "I didn't recognize that woman. That was a woman in trauma, in, I would say, shock, trying to understand what had happened."

"I had to remove myself and sit quietly so that I could think and see things from all angles," she said. "I've learned so much over the year."

"I really feel like it's gonna require another book. We are working on a documentary, because I feel like everybody needs to know the whole entire story."

"I've always been very, very naive," she admitted. "Unless you do something that I can see that you're trying to hurt me, in my heart, you're good. That's childlike, and it's naive."

"I'm trying to be more guarded. I don't ever want to get to the point where I'm cynical because I believe that there are more good people than bad."

"The most powerful thing, and I thought I knew it because I've talked about it before, but it's the power of words," she said. "I don't care how old they are. Words are so powerful. They can hurt, they can make people happy."

Paula Deen is hoping to make a return with a new digital venture called The Paula Deen Network.