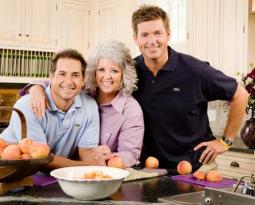 Charles was Deen's "soul sister" for 22 years, according to an interview with the New York Times, and helped launch Deen's Georgia restaurant while being paid $10 an hour.

"Stick with me, Dora, and I promise you one day if I get rich you'll get rich," Charles claims Deen told her. "I didn't think I had to get it in writing 'cause we were real close back then."

But, even after Deen made it big, Charles says that never happened. It "just passed me by," she says.

Given the recent allegations, when asked if she believes Deen is racist, Charles, who is African-American, replies: "I do. I do."

Charles said Deen repeatedly used the N-word in her restaurants and tried to exploit employees. She recalls Deen once asked her to ring a dinner bell and call for customers outside the restaurant.

"I said, 'I'm not ringing no bell.' That's a symbol to me of what we used to do back in the day," says Charles.

Deen then hired another woman, Ineata Jones, for the job and wanted her to dress up like Aunt Jermima.

As for why she's speaking now, Charles says: "It's just time that everybody knows that Paula Deen don't treat me the way they think she treat me."

"I'm not trying to portray that she is a bad person. I'm just trying to put my story out there that she didn't treat me fairly and I was her soul sister."

Deen's lawyers claim Charles simply wants money: "Fundamentally Dora's complaint is not about race but about money. It is about an employee that despite over 20 years of generosity feels that she still deserves yet even more financial support from Paula Deen."