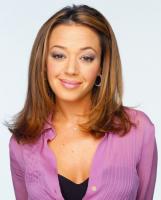 Paul Haggis, who quit the Church of Scientology in 2009, is praising friend Leah Remini for having the "courage" to do the same.

In an open letter published in THR, Haggis writes: "Leah and I were always friendly but never close friends. Despite this, she called me as soon as she heard about my letter of resignation. Unlike the rest of my former friends, she expressed real sadness that I was leaving and concern for me and my family."

The 'Crash' writer-director says Remini "was one of two Scientologists who had refused to 'disconnect' from me and certainly the only high-profile one when I decided to quit the organization in August 2009."

She "got in trouble" for defending him after he left Scientology, he writes.

"She had shouting matches with Tommy Davis, then the church spokesman, who had come to try and keep her quiet. The fact that she fought within the system so resolutely for so long, never making her feelings public, is a testament to how much she believed in the basic goodness of her friends and the institution."

"I was still shocked to see how quickly those friends—some of whom had known Leah for 20 or 30 years—jumped on the 'malign Leah' campaign, and with such apparent glee. I assumed Scientology's next step would be to try and plant disparaging stories about her with less-informed journalists and bloggers."

"And if others who had made noisy exits from the Church are to be believed, Scientology would also use their Office of Special Affairs employees to attack Leah indirectly, posting negative comments about her shows and career and abilities under myriad false names, pretending to be disappointed fans or whatever. None of that is new."

"I can't express how much I admire Leah. Her parents, family and close friends were almost all Scientologists; the stakes for her were so much higher than for me. Her decision to leave was so much braver."

"It was good to hear her voice and great to hear her laugh -- though it was easy to tell she had been terribly hurt and shaken by the events of the last weeks," he continues. "Leah is an incredibly strong woman and will get through this with the help of her family and her true friends. She is kind and generous and loyal; she has always cared more about others than herself."

"She barely knew me, and yet she fought for me and my family, a battle she had to know in her gut she was never going to win. That takes an enormous amount of integrity and compassion. I will forever be grateful to her."

In response, the Church of Scientology has issued a statement calling Haggis a "status-obsessed screenwriter."

"His statement that the organization anonymously comments negatively about those who leave the Church is delusional and borders on paranoia," it says.