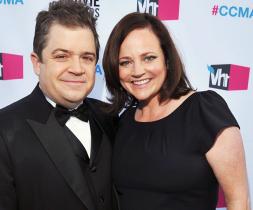 Patton Oswalt's wife Michelle McNamara, who was a true crime writer, has died at her home in Los Angeles. She was 46.

McNamara died suddenly in her sleep, according to Oswalt's publicist. He adds the passing was "a complete shock to her family and friends, who loved her dearly."

However, in recent years, she had turned her attention to cold cases and writing about small cases that usually did not receive the public attention she thought they deserved.

McNamara had also appeared on several episodes of documentary series 'A Crime to Remember' as an expert. She was currently working on a book about unsolved rapes and murders that took place across California in the '70s and '80s and hoped to uncover the perpetrators.

McNamara and Oswalt had a 7-year-old daughter, Alice, together.