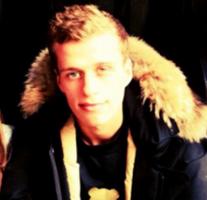 ), has been arrested after allegedly threatening to kill the British Airway flight crew.

Conrad surrendered following a warrant after he lost it on a British Airway flight from London to Los Angeles and called other passengers "peasants."

The 20-year-old is accused of assaulting and intimidating the staff on a flight.

Hilton is reported to have yelled out profanities at the crew and passengers including, "I am going to f---ing kill you!" and "I will f---ing own anyone on this flight... they are f---ing peasants."

"I could get you all fired in five minutes," he said as he grabbed one of the crew's shirts. "I know your boss! My father will pay this out. He has done it before. Dad paid $300,000 last time."

After punching the bulkhead of the plane and smoking a cigarette and marijuana in a plane bathroom, Conrad was eventually handcuffed to his seat.

Hilton was charged in federal court this week.

His attorney claims that it was all caused by sleeping pills Conrad Hilton took before the flight.