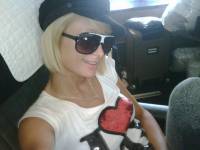 Shahi blasted the socialite yesterday in a series of posts on Twitter as she called Hilton "the worst driver ever", a "dumb bitch" and a "horrible excuse for a human being."

"I was so shocked when I read that," Hilton tells 'Extra'.

"First of all, I wasn't even driving that day. I just came back from Vegas with my boyfriend and we were home relaxing."

"I hadn't even been in the car that day. I literally came with a driver from the airport and went to my house."

"Then later on I read that, I'm like 'Dude, I wasn't even driving,' so I don't know. Maybe it was some other blond girl who looked like me."

"There are a lot of Paris Hilton look-a-likes, who do it for a living," she insisted. "They're always doing things and I'm getting blamed for it. So this could be another incident like that."