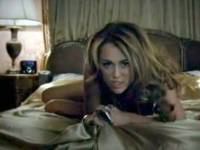 )' video for her single 'Who Owns My Heart?' has caught the attention of the Parents Television Council.

In the video, the 17-year-old gets dolled up in short shorts and a halter top, dances at a nightclub, grinds and dances suggestively with both men and women, and rolls around bed in lingerie complete with come-to-bed eyes at the camera.

"It is unfortunate that she would participate in such a sexualized video like this one," says Council President Tim Winter.

"It sends messages to her fanbase that are diametrically opposed to everything she has done up to this point. Miley built her fame and fortune entirely on the backs of young girls, and it saddens us that she seems so eager to distance herself from that fanbase so rapidly."

It's not the first time Cyrus has courted controversy from the PTC. Last year, she was criticized for pole dancing while performing her song 'Party in the USA' at the Teen Choice Awards