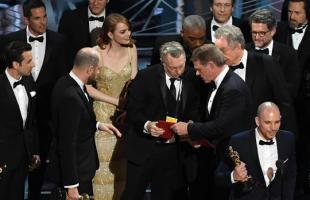 PricewaterhouseCoopers has put a new six-step plan in place to prevent another envelope mix-up at the Oscars.

Last year, the wrong envelope found its way into Faye Dunaway and Warren Beatty's hands. La La Land was declared the winner for Best Picture until, after several minutes of confusion, Moonlight was announced as the true winner.

Accounting firm PricewaterhouseCoopers had egg on its face after it was reported that its representatives, Brian Cullinan and Martha Ruiz, were taking selfies with celebrities and socializing backstage rather than focusing on their job.

Although they kept their day jobs, they weren't invited back for mishandling the envelope and failing to correct the error in a timely manner.

The firm has now banned the use of phones backstage and a third partner has been added to the roster who will sit in the show's control room with producers.

All three partners will be expected to have the full list of winners committed to memory and attend rehearsals on how to respond should there be another mix-up.

Presenters and stage managers will also have a bit of a added burden to ensure that the envelope they have received corresponds with the category they are about to present.

The Oscar nominations alerts were announced earlier this week.