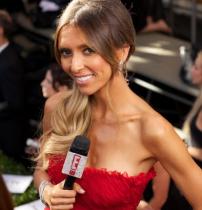 Kelly Osbourne is apparently warning people not to believe Giuliana Rancic after the 'Fashion Police' star blamed editing for the controversy around her widely criticized Zendaya joke.

"Liars ALWAYS get caught!," Osbourne wrote on Twitter the day Rancic said she wanted to "tell the real story" about the joke that associated weed and dreadlocks.

The controversy led to the abrupt exits of Kelly Osbourne and Kathy Griffin from 'Fashion Police'.

"I made a reference to the hippie culture," Rancic said on 'Today'. "I talked about patchouli oil, which is a hippie perfume."

"And in the editing process, some of the gestures I made, some of the things I said were taken out for time."

"I made peace signs, I said 'bohemian' twice -- those were taken out for time. So when the joke aired, some people were offended by it."

"I thought that the joke was not edited in the proper way, and that's just something I have to live with. It's very important for me to just get out there and tell the real story, and I knew I would have my moment."

"But those darn headlines were so crazy for so long that I thought, 'Let everything calm down, and then I can come out and tell the real story.'"

'Fashion Police' has been on hiatus since with no firm return date.