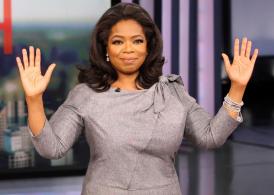 Oprah Winfrey isn't spilling on her vacation with Barack and Michelle Obama.

Asked about her vacation with the former President and First Lady, the media mogul was as quite as a boy's trip to Las Vegas.

The vacationing group off the coast of Tahiti also included Tom Hanks and Bruce Springsteen on a 450-foot yacht.

She is currently promoting her new film 'The Immortal Life of Henrietta Lacks', in which she stars as Deborah Lacks.

The film tells the true story of an a working-class African-American woman unwitting became the pioneer for medical breakthroughs when her cells are used to create the first immortal human cell line in the early 1950s without her consent.